A New Wrinkle In The Case of The Male Nude Painting 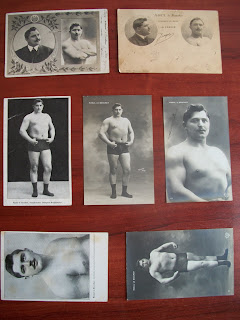 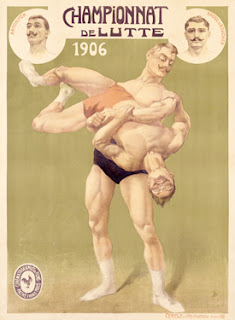 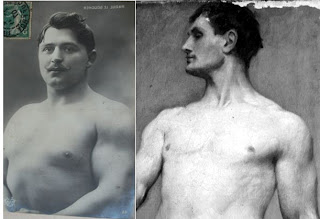 Well, never say never. There has been a new wrinkle in the identification of the Artist responsible for the Male Nude Academic Painting currently at the Conservationist Laboratory for restoration. The possibility of heading back to square one in now conceiveable. I received an email this morning from the kind lady in France, Arlette, who sold me the painting and she has developed some interesting information regarding the possible identity of the "Raoul le Boucher" written on the surface of the painting. According to Arlette there was indeed a very famous French wrestler around 1900 named Raoul le Boucher...."Raoul the Butcher", a name reflecting his talents in the ring I suppose. Above is a side by side comparison of a photograph of Raoul le Boucher dating around 1900 and the head of the model in the painting. I would not be surprised if le Boucher did actually pose for the life Drawing and Painting classes at the Ecole des Beaux-Arts. Gustave Moreau had a very respected reputation and would have attracted some famous models for his classes. Also above is cover art from a 1906 publication featuring Raoul le Boucher taking down a Russian wrestler. Take a look at the above photographs and let me know what you think.

I am not really convinced the model is a young Raoul le Boucher. The muscularture of the model in the painting and the part of the hair in particular does not fully match the later photographs. I am more likely to believe the Raoul le Boucher refers to Raoul le Gardier. This is typical when trying to trace the origin of any artwork, something one brings away from watching Antiques Roadshow. Over the years family myth most likely hides the truth. After looking at that color pallette on this painting and the similar color palette on le Gardier's later works that this fine academic work is more likely by his hand.
Posted by Passionate about the Academic Nude at 11:28 AM