Works of Art Coming from Europe 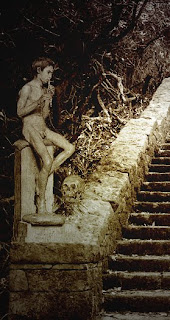 Above is an interesting "appropriation" of the drawing below that is coming from Milan, Italy after the first of June. The obviously computer generated photograph is by Giacomo Lorenzo, Maryland, who has used a single image from the Tamburini, Jr. drawing in his own creation. "Appropriation" is an age old technique in art and has served Mr. Lorenzo well in this case. 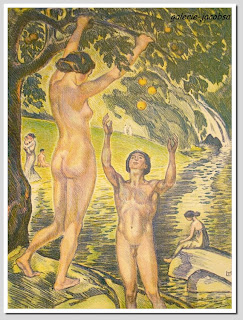 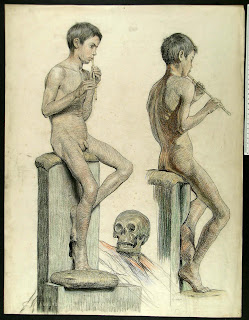 I am excited about several works which are on their way from Germany and Italy later in the month. (illustrated above) I think my second love in art is with intaglio prints and lithography. After I took my first printmaking class I fell in love with prints, the print making process, and, along the way of amassing my collection of Academic Nudes, I have tried to add select graphic works that are not necessarily considered strictly Academic works, although I will be showing a few intaglio prints I have managed to find in that category, but which do feature the nude as the central theme. Two of my favorite printmakers are Ludwig von Hofmann (1861-1945) and Lovis Corinth (1858-1925). One of the works on its way from Germany is a color Lithograph by von Hofmann. Ludwig von Hofmann attended academies in Dresden, Karlsruhe, and Munich (1883-89). He continued his training from 1889 to 1890 at the Academie Julian in Paris where he absorbed the influence of Pierre Cecile Puvis de Chavannes. If you are familiar with the works of de Chavannes then you can see the influence in his early subject matter. In 1890 he joined Die Elf, which included such great names as Lovis Corinth (1858-1925), Max Klinger (1857-1920), and Max Liebermann (1847-1935). Hofmann combines a traditional, academic style with Art Nouveau motifs. The title of the work is Reife Fruchte (Ripe Fruit..Loose translation).

The second work is by by Italian/American artist Arnaldo Casella Tamburini, Jr. (Florence 1885 - Chicago 1936). It is a work on paper in colored chalks and is titled Two Studies Of A Seated Nude Boy Playing The Flute. Tamburini trained in Italy and is known for his portraits of famous personages. He painted Sir Wilfred Laurier, Prime Minister of Canada, and a portrait of Enrico Caruso, which hangs in the Galleria d'arte Moderna di Palazzo Pitti. As well as portraits, Tamburini painted allegorical compositions and landscape.
Posted by Passionate about the Academic Nude at 3:15 PM