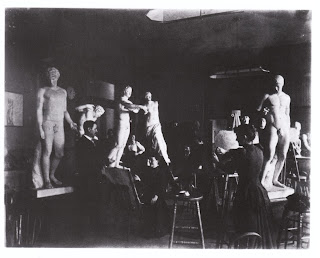 19th Century Drawing Studios for drawing from the Antique.... 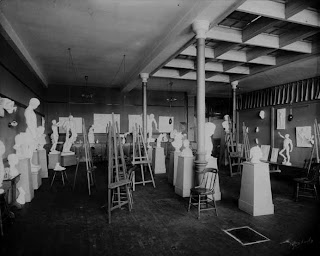 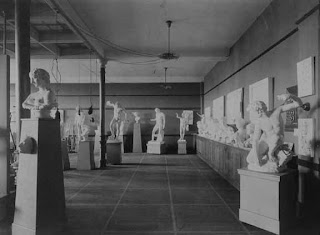 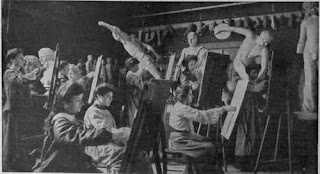 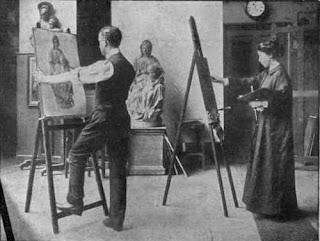 ----------------------------------
Caption: Drawing of a male nude from the Antique Cast
Artist: Unknown
Medium: Graphite on paper
Dated: circa. mid-to-late 19th Century
-------------------------------------
I bought this academic "drawing from the antique" last night from a seller in Paris. I have been looking for a nice example of 19th century student drawing from the plaster cast for quite some time. This was inexpensive and I grabbed it as it appears to be a superb example. From the illustration it appears to be a quality drawing, something which does not come up for sale every day and something there is usually little competition to obtain. Before an aspiring artist was graduated into the studio with a live model, he or she had to master the basics of observation and prove themselves ready to make that all important adjustment to a live model. Beginning students in the Academie would first master drawing from engravings or lithographs, graduate to lengthy drawing sessions from plaster casts, and then head into the life drawing studio. I have seen a lot of these cast drawings but none really grabbed my interest like this one did. I may be disappointed when it arrives but my educated guess tells me it appears to be by a technically proficient hand, most probably a student at the Ecole des Beaux-Arts or Academie Julian in Paris during the latter part of the 19th Century. The object of these exercises was to locate the figure on the page with technical precision, and then to describe what was going on out there at the cast in detail. That required a cohesive synthesis of line and tonality expressing volume, capturing the effect of light and shadow, reflected light, and of course, movement within the entire composition. I will photograph it when it arrives and post new illustrations of the drawing.
Posted by Passionate about the Academic Nude at 8:14 PM