The View From My Pillow: A Personal Reflection 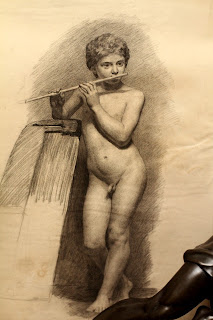 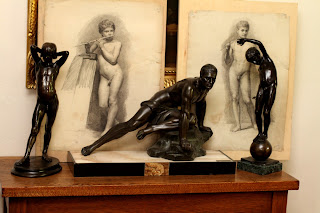 Each morning when the mutts decide it's time to get up, I turn my head and take in a simple tableau of drawings and bronzes set on an oak library table against the nearest wall. After having my heart restarted on three occasions last summer, having an electronic device embedded in my chest to restart it when it goes into overdrive again, I have started to really appreciate the very fact that I can open my eyes each morning and take in a small part of my collection of artworks. Each day waking up one more time becomes a reality that that particular day is indeed a celebration. That string holding the life force within each of our fragile bodies is so very delicate and fragile, and so taken for granted, a fact we sometimes overlook in our day to day rush. In this world that is in the process of going mad out of its mind we each must have some small event or place each day where we can take refuge for some kind of peace and self resolve. For me, it's in the beautiful creations of the various artists who produced the works around my home.

My mind is always spinning and thinking and the last couple of days I have been fascinated by the drawing of the young ephebe on the left (see the scanned image below and the photograph above), the Nude Boy playing the flute, by German artist Alois Kasimir (1852-1930). That drawing is actually a great example of the various drawing techniques prevalent in the 19th century academy. Drawing is technically observation, recognition, and translation. It is seeing what is out there on the human form and translating that into lights, darks, and mid-tones, all on a flat surface, in the process fooling the observers eye into believing your creation is reality. As I look at that drawing each morning I am amazed how the artist has managed, from the vantage point and distance of my pillow, to turn pencil marks on paper into three dimensional, fully modeled flesh. As I rise and get closer to the surface of that drawing, the lines that make up all that realistically modeled flesh (lights, darks, and mid-tones) start to become more obvious. The drawing becomes more about lines and less about moulded flesh. There is a point in distance from the surface of that drawing where the observers eye actually begins to complete the transition from line on paper into what appears to be real flesh and bone. I have taken that large drawing and scanned it life sized. I had to stitch the pieces together and because I did not want to damage the drawing further that in the shipping, some of the surface appears blurred so just ignore those areas and concentrate on the central figure itself. Take a look at the close up of the lines in that drawing and see if you can discern the various techniques the artist has used.

That drawing was started by means of a light contour drawing that the artist would go back into and refine in later stages of the drawing process. Three distinct methods of shading were used, often together in the same drawing: (1) hatching, which required the artist to apply distinct parallel strokes to model the form, and if necessary, a second set of strokes at the opposite angle on top, to produce cross-hatching; (2) graining, which means creating solid areas of shade with no separate stroke visible, the inflection of the actual grain of the surface of the paper showing through; and (3) stumping, which made use of a rolled-up piece of paper or leather to blend lights and darks. Graining and stumping were frequently taught as different forms of shading, to be distinguished from hatching. Contour, shading, and hatching, which comprised a three part vocabulary of representation. In effect, the model was viewed and transcribed in terms of separable pictorial elements, and each element carried as part of its meaning the academic context from which it was derived. Thus when viewed in context, hatching was learned from copying engravings and carried a reminder of two-dimensionality even as it was used to describe volume. Conversely, shading came into its own when copying from plaster casts; it continued to suggest smooth volume even when laid out in flat areas on the sheet of paper. The concept of half-tones in drawing was also learned from copying casts, which to the unpracticed eye simply look white under illumination and dark in shadow. If you look carefully you can see lost and found line in that drawing also. It has in reality become a symphony of line.

The aim of academic instruction that led to the creation of Kasimir's Nude Boy with Flute was to encourage students to see the not immediately apparent intermediate tones between light and dark, so as to create a more graduated effect of relief. A drawing like Kasimir's has made use of all these techniques to present the nude figure as if it were a kind of modeled sculptural relief when in truth it is nothing less than cleverly applied lines on a flat piece of paper.

Posted by Passionate about the Academic Nude at 1:58 PM