*
Kunst-und-Auktionshaus Peter Karbstein, Dusseldorf, DE has recently listed a nude by the German Expressionist artist Christian Rohlfs (1849-1938) in their current catalog. Christian Rohlfs was a well known German painter and print maker who was active during the later 19th and early 20th centuries. According to his biography, he took up painting as a teenager while convalescing from an infection which ultimately cost him his leg. He began his formal studies in Weimar in 1870. His first painting examples were large-scale landscapes and he successively worked through academic, naturalist, Impressionist, and Neo-Impressionist styles. In 1901 he left Weimar for Hagen at the urging of art collector Karl Ernst Osthaus, who offered him a studio in the modern art museum he was establishing there. Through his exposure to the avant-garde movement, including meeting Edvard Munch in 1904 and Emil Nolde in 1905, seeing Van Gough's choppy brushstrokes and vibrant colors, his work moved into its final Expressionist phase. By the age of sixty, he had 185 prints in his oeuvre of masterworks. Aside from a few lithographs, he worked exclusively in woodcut and linoleum cut mediums. In 1937 the Nazis expelled him from the Prussian Academy of Arts and condemned his works as "degenerate." Some 412 examples of his works were ultimately removed from public collections.
* 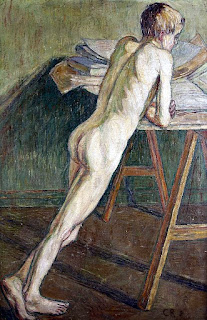 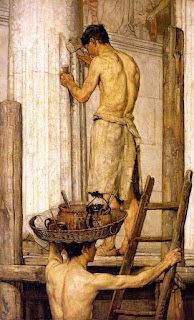 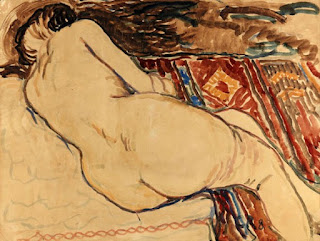 Posted by Passionate about the Academic Nude at 3:33 PM