*
I recently paid a visit to Adonis Art International, a London based gallery specializing in mostly contemporary male nudes of a particular persuasion. Occasionally they will list a 19th century academic nude that fits well into my collecting purview. Ninety-nine percent of their offerings have no personal interest for me but once in a great while I will find an academic nude gem that I can afford. They currently have two 19th century academic drawings by an unidentified German artist named Wilhelm Schmidt, unknown German Academy, listed on their site. I could afford only one of the drawings so I chose the standing nude male youth, signed and dated 1899. It seems to be more technically executed than the other listing of a seated male nude. Needless to say getting biographic information on an artist with a common name like Schmidt is not an easy task. I will have to do some additional research and see if I can find some basic information on this particular Schmidt. German artists Hans Wilhelm Schmidt (1859-1940) and Wilhelm Schmidt (?) are two likely candidates. The condition of the drawing is somewhat problematic but the central figure is without damage and careful matting can preserve the drawing for display. Still a beautifully executed male nude from an unknown German art school by a yet identified German artist. I will scan and photograph it when it arrives and post more details without the gallery watermark.
_________________________________ 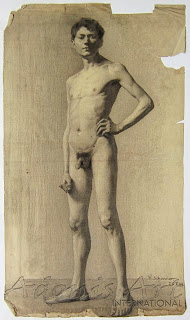 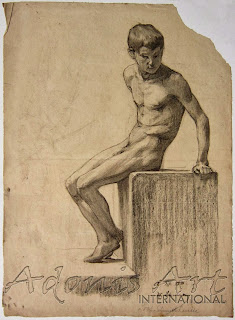 Posted by Passionate about the Academic Nude at 1:29 PM