Book Review: The Language of the Body - Drawings By Pierre-Paul Prud'hon 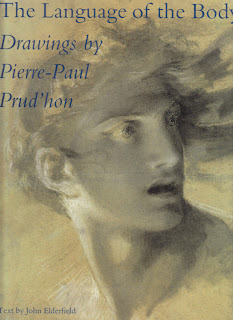 Book Cover design:
--------------------------------------
One of the responsibilities of collecting fine academic drawings and other academic works is the necessity of educating yourself to the time period from which you are likely to draw examples of work for your collection and acquiring knowledge of the classical techniques used in the 18th and 19th centuries. I try to maintain a good selection of books that are germane to my collecting habit and which will add to my knowledge of the subject matter. I greatly admire the technical skills of classically trained artists and really lament the fall of the training system that produced such fine artists and their works. Unless you enroll in an atelier that specifically specializes in 19th century training techniques and teaches you those skills, you are simply not going to get that kind of education and skill level in most of the public educational institutions today. Although not a technical treatise on drawing technique per se, this volume does contain very informative chapters and discussions on "the body" in 18th and 19th century art and the "Academie" in the late 18th and early 19th centuries, not to mention some great illustrations of Prud'hon's drawings. Allow me to paraphrase some of the text specifically in regards to drawing techniques:

Interestingly enough the text answers some of the questions in my mind about why quality female nudes are missing from this period in academic training. By 1793, life drawing and the Academy had already become synonymous. Denis Diderot's Encyclopedie of the time defined an "academie" as a "public school where painters go to draw or paint, and sculptors to model, after a nude man called the model." Notice the emphasis upon "man" in that statement. Hence, the term academie, or academic exercise, was used for a life drawing. Even after completing his training, Prud'hon continued to make academies well after his student years. Most of his figurative drawings that have survived are not student drawings. Many of them are drawings of women, which, interestingly enough, also distinguishes Prud'hon's drawings from contemporary student works. In the 18th century, female models were expressly forbidden in the Academy and extremely expensive to hire in private studios. Prud'hon's academies also belong to a genre that developed in a pedagogical context of the late 18th century.

Before a student was allowed to make academies, he had to show proficiency in two preliminary stages of drawing instruction: first, the copying of two-dimensional works of art, often engravings, which often meant copying images of parts of the body before moving on to entire figures; and second, drawing after sculptures, usually plaster casts taken from recognized antique master-works. Thus, confrontation with the live model, when it was finally permitted, was mediated by a learned understanding of the body as, first, a flat surface construction, and second, a smooth, white, idealized volume. The life model was experienced at a distance through approved representational conventions of two and three-dimensional art.

In the late 18th century, students always began with red chalk on white paper because it was thought to be simplest means for adjusting lights and darks, thus to create an effect of modeled form. More advanced students could advance to the blue paper that Prud'hon favored. Here (importantly), the paper itself stood for the half-tone, or middle tone, between the light and dark, and two drawing materials were used upon that base line: one that was lighter than the paper itself, a white chalk, for illuminated areas; one that was darker than the paper, a black crayon, for shadows.

A drawing was started by means of a light contour sketch, which would be refined later. The three methods of shading were used, often together in the same work: hatching, which required distinct parallel strokes to model the form, and if necessary, a second set of strokes at the opposite angle on top, to produce cross-hatching; graining, which means creating solid areas of shade with no separate stroke visible, the inflection of the surface resulting from the grain of the paper showing through; and stumping, which made use of a rolled-up piece of paper or leather to blend lights and darks. Graining and stumping were frequently taught as different forms of shading, to be distinguished from hatching; contour, shading, and hatching comprised a three part vocabulary of representation. In effect, the model was viewed and transcribed in terms of separable pictorial elements, and each element carried as part of its meaning the pedagogical context from which it was derived. Thus hatching was learned from copying engravings and carried a reminder of two-dimensionality even as it was used to describe volume. Conversely, shading came into its own when copying from plaster casts; it continued to suggest smooth volume even when laid out in flat areas on the sheet of paper. The concept of half-tones was also learned from copying casts, which to the unpracticed eye simply look white under illumination and dark in shadow. The aim of instruction was to encourage students to see the not immediately apparent intermediate tones between light and dark so as to create more graduated effects of relief. A drawing of a figure making use of these techniques will present the figure as if it were a kind of modeled relief.

The author also draws a definite distinction between an academie and an etude, the distinction being whether the model was posed only for drawing purposes or was posed for a specific (future) purpose. 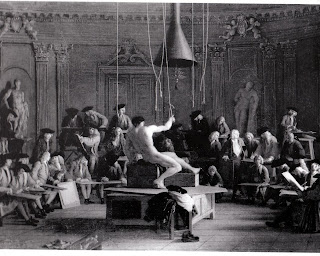 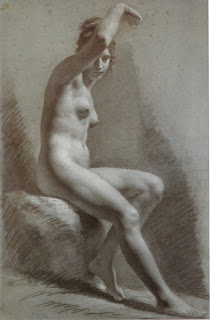 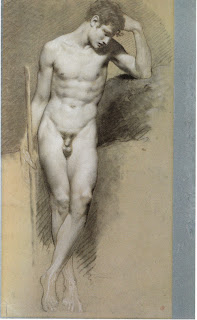 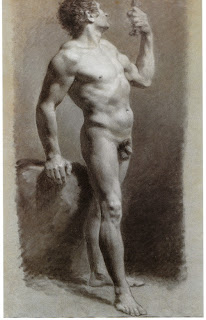 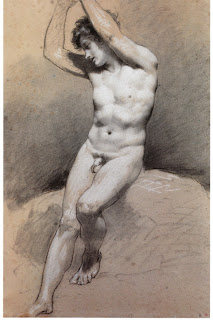 Posted by Passionate about the Academic Nude at 9:13 AM