I was rummaging around in the print cabinet looking for a screw driver this morning and found these two works hiding in a folder. I am always on the lookout for "different and mildly erotic" works and these two works fit that bill. I thought I would post them as a temporary change of topic for you. The Franz Kuna drawing came from our friends at Wilnitsky Gallery in Vienna and just cracked me up when I saw it. If you read the drawing from right to left you will easily follow the action. The poor guy on the far left is fully sated and the customer entering the madam's establishment is just getting started according to the bulge in his toga. Kuna was a well known Austrian/Czech artist who worked in Vienna during the first part of the 20th century. The second work is an intaglio print from a European artist by the name of Hansjorg Singer (?). Unfortunately, I have been unable to find any credible biographic information on him but his work is most unusual, to say the least. This came from a German seller who had a few examples of Singer's erotic prints and the thing that got my attention on this print was the highly unusual subject matter. Everyone has heard the Fairy tale of Hansel and Gretel but I'll wager you have never heard (or seen in this case) the true story.... that is, according to Singer. Again, it is a wonderful tongue-in-cheek spoof on a favorite tale. * 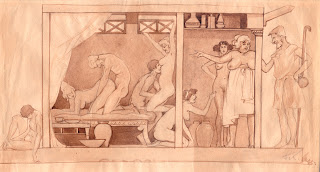 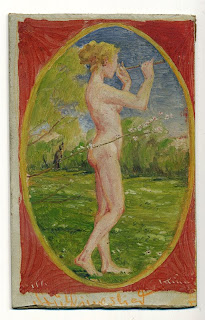 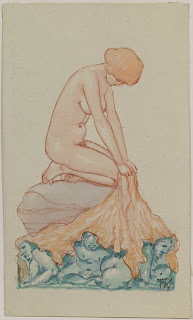 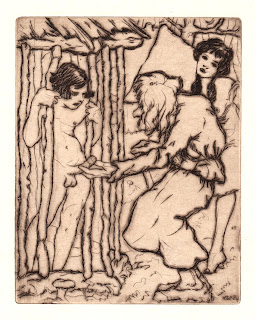