*
Our friend at La Portantina di Mattia Jona, Milan, Italy has just posted his new aquisitions. This nice pen and ink Male Nude caught my eye. Pelagio Palagi (1775-1860) was an Italian architect, portrait painter, furniture designer and collector. He started his training early and by the age of 20 he was collaborating with Antonio Basoli in Bologna. He attended the evening drawing sessions at the home of the Italian engraver Frencesco Rosaspina. In 1802 he studied at the Bolognese Accademia. In 1806, he moved to Rome, continuing his studies at the Accademia de San Luca under Camuccini. In 1815, he moved to Milan, where he remained until 1832. During his residence in Milan he established a private school of painting and architecture. He was elected to the Brera Academy. In 1832 he was employed by then King Carlo Alberto to direct the decoration of the royal residences. (Thanks to Matta Jona for the illustration and biography of the artist)
--------------------------------------- 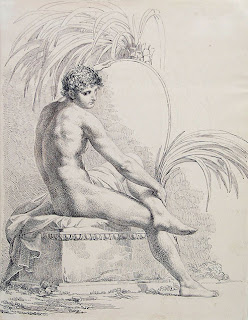 Posted by Passionate about the Academic Nude at 12:41 PM