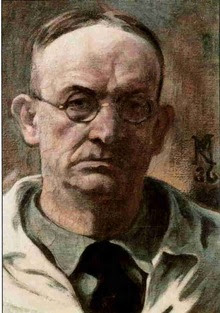 Self-Portrait of the artist..... Hermann Knottnerus-Meyer

Kunst und Akutionshaus Peter Karbstein, Dusseldorf, DE has recently listed this beautifully lyrical group of female nudes in their current Auction catalog. Hermann Knottnerus-Meyer (1875-1945) was a well known German painter and writer. He studied in Munich under the tutelage of another artist I have previously posted on here in the blog, Paul Schad-Rossa (1862-1916). He traveled extensively and had several periods of creativity during his lifetime. The auction house describes the painting as "Graces." I love the interlocking points of tension between the two figures in the foreground and those of the two figures in the background. The composition is anything but static. He became a friend and supporter of the German folk poet Hermann Lons (1866-1914). I am guessing that because of his penchant for painting mythological scenes that this painting is a depiction of "The Judgement of Paris." To my eye, that seated figure appears to be a male youth, just based upon the anatomy. Who knows? 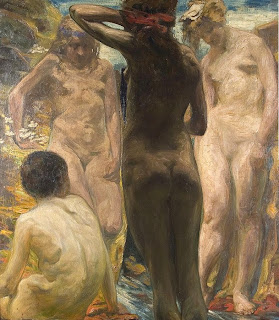 Posted by Passionate about the Academic Nude at 1:45 PM