This beautiful 19th century drawing came into my collection from a Southey's auction years ago. Although unsigned by the artist, it does bear the stamp of the Atelier l'Appian in the lower right hand quadrant. Adolphe Appian (1818-1898) studied at the Ecole de Dessin et Beaux-Arts in Lyon, Framce where he was taught by Jean-Michel Grobon (1770-1853). In 1851 he debuted at the Salon of Lyon with three paintings. He studied in Paris later and befriended Camile Corot and Charles Francis Daubigny, who both influenced his work. In 1868 he received a gold medal at the Paris Salon.
----------------------------------------- 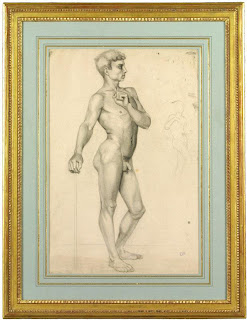 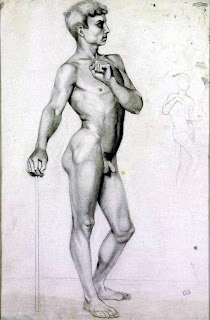 Posted by Passionate about the Academic Nude at 10:06 AM