Several days ago I managed to take at auction the below listed drawing of a standing nude boy. The drawing is signed "Bill 07" in the upper right hand corner (American or English art student perhaps?). It comes from Provence and the identity of the artist is any one's guess. It appears from the illustrations listed in the auction to be a nicely executed drawing from the first decade of the twentieth century. Based upon that pose with the raised finger and that staff the figure is holding, my guess is a depiction of young St. John the Baptist. St. John is often portrayed as carrying a long crudely made cross and pointing up to the heavens above. I will photograph and re-post the drawing in greater detail when it arrives.
***********************
Well, shut my mouth and call me a biscuit, never say never. I just had a brain storm. I was looking at that signature and thought perhaps the signature reads: "Billot" and not "Bill 07." Anyway, that drawing has a 19th century feel to it to my eye, so a quick Google search revealed two possible candidates: Charles-August Billot (1800-1900)(?) and Achille Billot (1834-?). Without any indication of a first name we may never know, although my money is on Charles-August Billot since he was active during the latter part of the 19th century. Neither "Billot" was listed with examples of their works for stylistic comparison. Oh well, it is obviously Young St. John. That much we can say for sure.
********************** 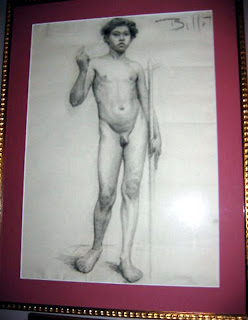 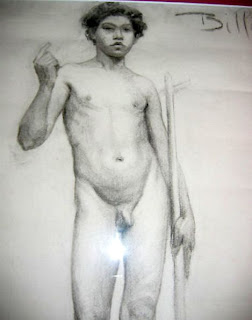