*
Yesterday I was doing some creative browsing of Antiques sites in the UK and I stumbled upon this beautiful bronze. I am always on the lookout for works by female artists from the Golden Age of the Academie because they tend to be women who were trend setters in the 19th century man's world. This work is by the English artist Erica Lee (active 1920-1960). She was born in Manchester in the late 19th century and studied under Edwin Whitney Smith (1880-1908) and Sir William Dick (1878-1961)(Scottish Sculptor). She exhibited frequently at the Royal Academy, The Royal Scottish Academy, The Glasglow Institute and other provincial galleries, as well as the Salon des Artistes Francais. She specialized in sculptural heads, busts, and portrait reliefs in terra cotta and bronze. She was a member of the Society of Portrait Sculptures. She was very active during the inter-war period. This bronze caught my eye because of the playful movement and absolute spontaneity of the work. Apparently, this particular bronze was featured on Antiques Roadshow (UK version) in 2000. After the broadcast a viewer recognized the sculptor because he was the model for the recumbent boy at age eleven. (Illustrations and commentary courtesy Richard Gardner Antiques).
-------------------------------------- 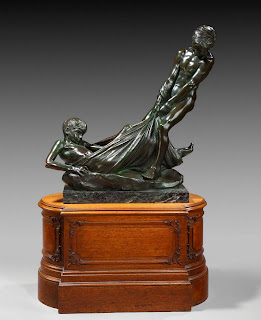 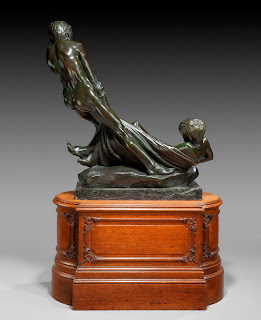 Posted by Passionate about the Academic Nude at 10:10 AM