**************************************
This nice little Lithograph of a male nude by Bernard-Romain Julien (1802-1871) arrived in the mail today. I had to do some research to divulge the true authorship of this lithograph. At first I mistakenly thought the drawing was done by Rodolphe Julian (1839-1907) and used as part of the drawing study course at the Atelier Julian. I discovered, after pulling down a wonderful reference source: Charles Bargue - Drawing Course by Gerald M. Ackerman (ISBN 2-86770-166-X), that Bernard-Romain Julien actually had published his own drawing course around 1860. It was designed for use in public schools in France, a fact that it proudly declared on the title page. Julien's course actually parallels the more famous Bargue-Gerome course by beginning with details of the face and proceeding to full views of antique statuary. Julien's plates are in a refined, linear, Neoclassical style. I discovered another blog about drawing that gave a brief history of Julien, which I will quote here: "Julien was a prominent French Lithographer and printer from Bayonne, France. He illustrated a Cours de Dessin which was used extensively to teach principles of drawing in the mid-19th century. His cours preceded that of Gerome and Bargue, and represents the height of achievement in sculptural rendering in lithography, just before the advent of photography led artists towards camera-conditioned rendering. His hatch marks echo the tool marks of Michelangelo, translating planar surfaces into sensitive passages of tone. These plates were intended to be copied by students, proceeding from mise-en-traits, to a linear contour, to tonal rendering. Julien was a student of Antoine-Jean Gros (1771-1835), who studied with Jacques-Louis David (1748-1825). Through this lineage, julien is connected back to Louis Boullogne the Elder (1609-1674), one of the original founding members of the Academe royal de peinture et de sculpture in Paris in 1648. Julien's lithographs were printed in France and England by multiple printers and enjoyed a wide circulation."
----------------------------------------- 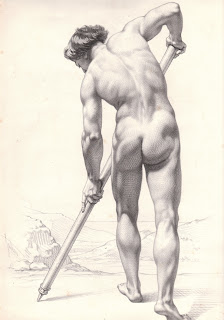 Posted by Passionate about the Academic Nude at 3:25 PM No comments: 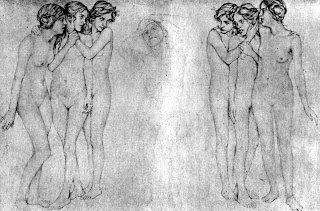 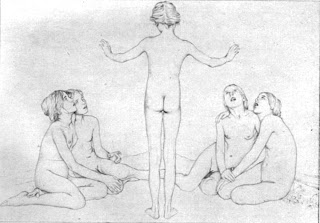 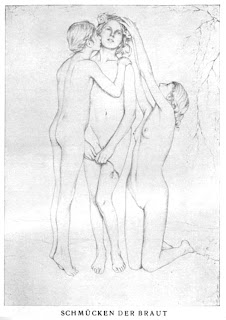 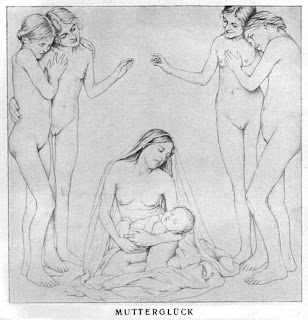 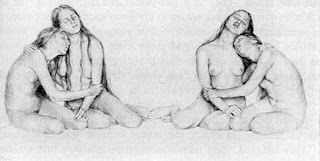 I am not sure how I got off on this tangent but it seems when you make a generalization about something (i.e. adolescent female academic nudes and their scarcity) there is always a website out there somewhere to prove you wrong. The Internet has been a boon for the art collector and I owe the majority of my collection to being in touch with some very fine people throughout the world. Again, while doing some research on something else, I lucked onto a site that actually featured the male adolescent nude but there in the midst of all these nude boys were a few jewels of beautiful works by a female artist who truly appreciated the female body. I must thank Antiques Collaborative, Inc. of Quechee, Vt. for their brief history of the artist and her works. Let me quote from their website of a listing of one of her beautiful lithographs titled "Draum"(Dream): "Ida Teichmann (German, born 1875- ?) was a female German artist known for her drawings and lithograph portrayals of the adolescent girls and young children. Teichmann was born in Frankfort am Main and was largely a self-taught artist. She sought to capture the essence of the adolescent form. Her works show direct influence in their style to the painters of the Pre-Raphaelite Brootherhood in England. All of her lithographs were engraved directly onto the stone by her and then printed by her in very small editions. She used a fine rice paper for the prints because it more faithfully reproduced the fine lines and shading of her drawings." As you can see from the few examples of her work she was in control of her medium, regardless of her training. I think that first drawing at the top of this listing is my favorite. I love the composition and the interaction of the figures.
Posted by Passionate about the Academic Nude at 1:23 PM No comments:

Well, never say never. I was running through a Russian website and stumbled upon a couple of Alexander Ivanov's beautiful Academic studies of children. It seems that the majority of his major works have a nude Ephebe in it somewhere. This female nude is somewhat rare and you do not see them everyday of the week like you do works featuring boys and male youths. Enjoy.
----------------------------------

Posted by Passionate about the Academic Nude at 11:57 AM No comments: