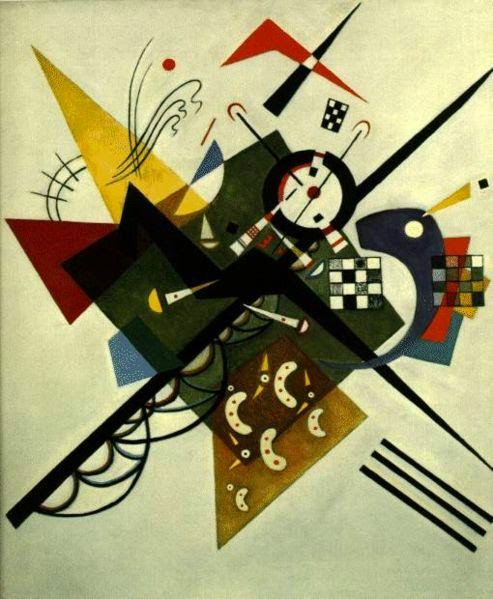 I was browsing my usual conservative blogs last week when I ran across an article which greatly impacted my thinking and brought together something I have always had in the back of my mind when I manage to hit an art museum and which probably goes a long way in explaining why I hate modern art so much (being a Classical music enthusiast). Like the museum goers in his article, I can't seem to get out of a modern art exhibit fast enough. Chet Richards puts a name to what went "wrong" in art at the turn of the 19th & 20th centuries and which in my opinion hastened the demise of strict academic training and the academy system which supported it. I thought I would share the article with you as food for thought.
--------------------------------------------------------------
(Source: Chet Richards, American Thinker, March 9, 2014)

For many years I had a much older friend.  My friend was highly intelligent and musically cultured, but he had an odd quirk:  He listened to Arnold Schoenberg’s atonal, and highly dissonant, music for pleasure.  My friend maintained that this music was the epitome of beauty and that the philistine world would eventually see that beauty as he saw it.  Classical harmonious music was hopelessly obsolete and banal.

Then, one day, my friend was exposed to Vaughan Williams’ “The Lark Ascending.”  Tears in his eyes he admitted that he had never imagined something could be so transcendently exquisite.  With this, his mind newly opened, he began a deep reevaluation of why the great musical classics were indeed classics.
I was not greatly surprised at his emotional epiphany.  After all, like myself, my friend was a product of U.C. Berkeley. There, my professor in the music history class was openly scornful of twentieth-century attempts to maintain the traditions of tonal music.  Music had to break free of such straitjacket restrictions.

The music composition majors did not agree.  In order to survive in the music department, the students were constrained to write only atonal music – the more dissonant the better.  The students hated this injunction and went on strike.  This strike preceded the famous Free Speech Movement but it had its impact on that later student unrest.  The music faculty caved and reluctantly allowed tonal music to be a student’s thesis.
Inspired by the rebellion of the music students the art students similarly went on strike -- successfully.  They had been forbidden to paint representational pictures.  Students who wanted to do that should take up architecture, not fine art.

Change of scene:  Recently the National Gallery of Art in Washington D.C. had an amazing exhibit of the works of Albrecht Durer, the Renaissance master.  The walls were jam packed with masterpiece after masterpiece.  After two floors of these treasures one was ushered out into a room of modern “masterpieces.”  I put quotes around the description of these works of Picasso and Braque because of the visible reaction of people as they transitioned from the Durer exhibit into this new room.  I stood and watched the migrating people for awhile.  For almost all, their reaction was the same as mine had been:  repulsion at the ugliness and a desire to leave the area as quickly as possible.

What is going on?  Why the visceral reaction of sophisticated people to the contrast between Durer and the modernists?  Why such totalitarian behavior on the part of a world class liberal arts faculty? The answer lies in the fact that the intellectual world of our era has been seduced by a fashion that had taken hold early in the twentieth century.

What is this oddly seductive idea?  It is the notion that human beings are born as blank slates. That is, humans have no preprogrammed behavioral and emotional inclinations.  If humans are indeed born blank then they can be programmed in any way that society deems appropriate. This idea fit perfectly with a certain brand of radical politics.  If people start out as blank slates, then a utopian socialist society of true equality and happiness can be created by leaders of great wisdom.  There is a busybody arrogance in this kind of thinking (guess who the proposed leaders will be).

Does this sound Marxist?  Well, it is.  Am I being judgmental, am I being sarcastic?  You bet I am!  Is this idea obsolete?  It should be, but, within the walls of Academia and the trenches of Progressive Politics, the idea still rings with powerful echoes.

Actually, many scientific studies have developed convincing data which should have put this idea to bed long ago.  Most notable are the identical twin studies.  Such twins, reared separately, and with no mutual contact, are usually remarkably similar in behavior.  Conversely, adopted children, genetically different, but raised in the same family and environment, turn out very different.

Then, too, there are wide variances in intelligence and talents.  Some things that are easy for one person are impossible for someone else.  That is obvious.  And yet, the very idea is bitterly reviled by many people who regard themselves as intellectuals.  Nonetheless, we all have practical experience with the idea that humans are not entirely the product of their environment.  Let us consider a couple of examples.

Four decades ago I was on an expedition into a little explored region of Africa.  There, we encountered a tribe which was completely unknown to the outside world and which knew nothing of that larger world.  This tribe was pre Neolithic.  They had successfully domesticated bees and had a very primitive kind of agriculture.  But the evidence was that they did not fully understand the connection between seeds and plant growth.  It was some kind of magic.

So, what happened when we, with twelve thousand years of further cultural development, came in contact with these Paleolithic people – with no spoken language or technology in common?  Actually, we all got along just fine.  Our body language turned out to be the same.  Our sense of propriety -- do’s and don’ts -- were the same.  And, surprisingly, there was a lot of communication amid the mutual laughter. Tell me again about blank slates.

The second, more contemporary, area where the blank slate concept has been extensively tested is in the arts.  If people are indeed completely malleable then they can be trained to love any kind of art.  With this in mind, composers started creating atonal and highly dissonant music.  Audiences hated it.  And they still do – despite the pressure to conform to modern fashion.

The world of painting went through a similar period of experimentation with the idea of full human programmability.  Representation was deliberately broken down into complete abstraction.  That’s okay -- all art is, to a greater or lesser degree, abstract. And sometimes fully abstract art can be profound, or entertaining.  Witness Mark Rothko’s emulation of the vast spaces of the American West.  Or, the delights of Kandinski’s whimsical kaleidoscopes.

Unfortunately, people being what they are, most of these modernist experiments failed.  The results were ugly, or incomprehensible.  If you have any doubt about this just walk into any modern art museum and observe what is on the floor and the walls. The Smithsonian Hirshhorn Museum provides many excellent demonstrations of the ugliness of much contemporary art. So also are Francis Bacon’s portraits of his patrons as decomposing corpses. Then, too, there are scribbles pretending to be art and intended as a deliberate insult to the masses.

In what was probably a childish reaction to the popular rejection of the new art, Progressives converted these artistic “experiments” into instruments of political aggression. Ugliness was deliberately promoted as a perverted positive value. Its purpose was made clear to me one evening, long ago.  It was at a Hollywood party that I chanced to chat with a film composer.  I thought I understood the uses of atonality in film scores but, to confirm my suspicions, I asked the composer if he used those techniques.  He did, but sparingly.  He used them to create tension, disorientation, to induce depression.

Induced depression. That is what is going on in much of today’s popular music, and the other arts. A lethal attack on our nation does not have to be military in nature. It can come through the destruction of our culture and our morale.  Really listen to contemporary popular music.  It has split into two incompatible strains.
On the one hand we have brutal, heavy and highly dissonant music – often a type of monotonic chanting to pounding rhythms.  The words are those of violence and despair.  This is music that is deliberately intended to create depression and a loss of morale.  This music is full of hate, but it is seductive to immature minds that are still subject to peer pressure.  I live in a deep blue state and this type of music is all around me.
On the other hand we have newly composed, and beautifully performed, lyrical songs – some of them religious, some of them Country, some of them just plain lovely.  This type of music is popular in many parts of the nation, and outside of the cities in this state, as well.  As it was when I was young, people in those other parts of the country, but no longer in this, still sing – together and by themselves.

Which of these conflicting cultures will win out?  Beauty, of course.  I leave you with this:  About five thousand years ago a flute was deposited in an Egyptian tomb.  This now fragile instrument was carefully replicated in modern wood.  When played, this replica, to everyone’s surprise, produced our modern harmonies and could fit nicely in a modern orchestra.  Really, it should not have been a surprise.  Our musical scale is derived from the harmonics of a string and the very ancient Egyptians had stringed instruments.  But there is a deeper message:  The harmonics of strings and the harmonies that this instrument produced are, for unknown reasons, tuned to something that is deep within us.  Triads are harmonious, closer intervals are dissonant.  We are not blank slates.  Some sounds, some images, reach something primal within us.  We find them beautiful.  Art which resonates with those primal human elements will survive and flourish – and so will the associated culture.  Attacks on us by Progressives, through the arts, will have little impact in the long run.  We will survive quite nicely, thank you!
Posted by Passionate about the Academic Nude at 12:27 PM No comments: