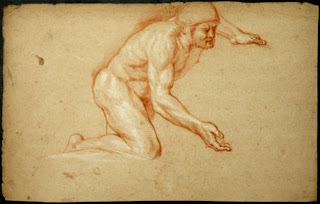 Posted by Passionate about the Academic Nude at 9:39 AM No comments: 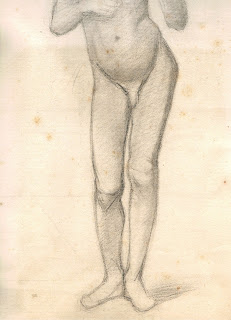 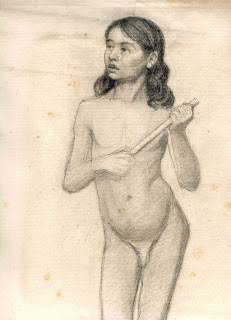 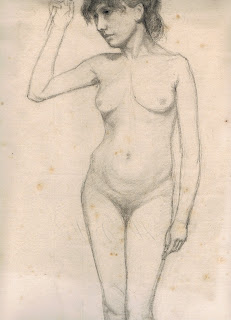 Posted by Passionate about the Academic Nude at 11:33 AM No comments: 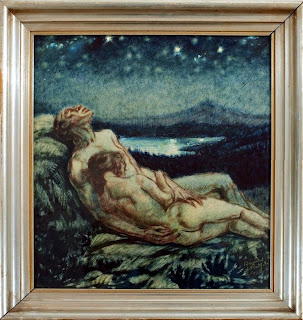 Posted by Passionate about the Academic Nude at 12:47 PM No comments: 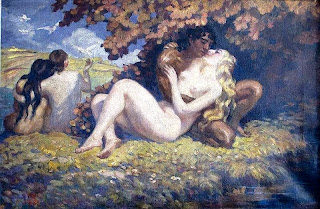 Posted by Passionate about the Academic Nude at 4:58 PM No comments: 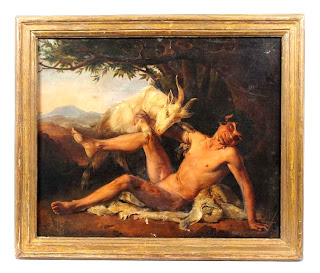 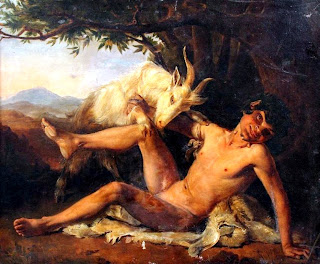 Posted by Passionate about the Academic Nude at 4:13 PM No comments:

*
When someone tells you "What goes around, comes around" then believe them. Last month a German seller posted this academic drawing of a nude ephebe by Marie Augustin Zwiller (1850-1939). I made a pleasant enquiry regarding the lot, shipping charges, an immediate buy price, and received a verbal thrashing. Now I am known on eBay for my "you get more flies with honey than vinegar" approach, so I carried on in my mild mannered approach.  I do not think I have ever had a seller be so down right mean in his reply. This guy was a horse's-ass. I had asked about a direct buy purchase price and we sent emails back and forth for a few days and I finally said "Screw it!" and gave up. I even offered to pay all of his listing fees, including his Paypal fees for what I considered a reasonable offer. After we agreed upon a price, he nails me with what I knew to be outrageous shipping charges. That's when I decided I simply did not want the problems. The auction went off without me and the drawing sold for a few hundred Euros. Guess what? This morning the drawing pops up on eBay France with a price double what I know the German seller sold it for, even with the same photograph the German seller originally listed. I have to laugh, sellers are always out for a buck or two. Unfortunately, I could find little biographic information on the artist but he is well represented in the auction world.
------------------------------------------------------------------------ 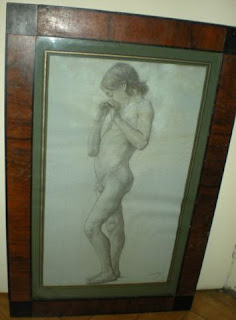 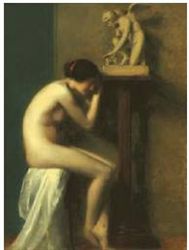 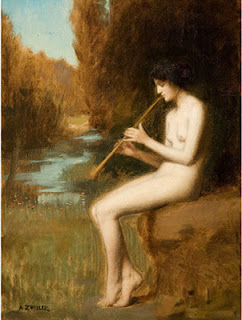 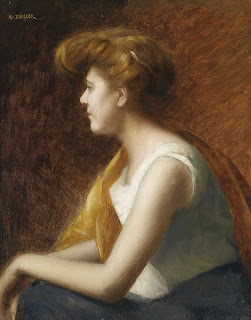 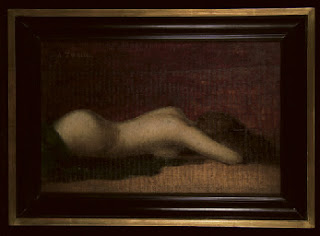 Posted by Passionate about the Academic Nude at 11:04 AM No comments:

Last week I was cruising along in the various categories I monitor on eBay France and I stumbled upon something that caught my immediate attention. One of the French language categories I watch is the category of "Christ on the Cross" (in French, of course) and "Corpus Christi."  Honestly, you never know what some seller is going to list with a male nude attached to it. I have browsed this particular category in all the various European auction sites, especially in the Belgian, Dutch, French, Austrian and German sites. The great majority of works depicting the crucifixion are run-of-the-mill industrially made ho-hum depictions but on occasion you will come across something that knocks your socks off. I have seen exquisite but expensive ivory (which requires permits to import) and bone carvings of Christ but when I see something with a distinct artistic feel to it such as this bronze casting below, I have to take a second look at that work. My first impression of this bronze was: "Wow, wait a darn minute. What do we have here?" This work has that extra something that you do not see in the everyday depictions of the semi-nude Christ. To my eye this bronze has a distinct "Art Deco" feel to it and does not have that assembly line feel you see so often. This is literally the first signed work I think I have ever seen in this category. The French seller in Bordeaux obviously had no clue what he had because he was literally giving the thing away and he made no attempt to even list the item appropriately. At the steal of a price of 30 euros he was asking, I decided to look further into it and see if I could identify the "Hartmann" stamped in the edge of the cross. I programmed an automatic bid and went about my business. What I eventually found was a very good probability that the Hartmann signature on the bronze belongs to Hans Hartmann-Maclean (born Hans Rudolf Hartmann) (1862 Dresden - 1946), a German Sculptor who was active during the latter part of the 19th and early 20th centuries. He produced many sculptural works and castings with religious themes, including some beautiful monumental church and civic works which were subsequently lost during WW II.  He studied at the Dresden Art Academy from 1879 to 1885 and guess who was one of his sculpture instructors? If you guessed Johannes Schilling, then you get the prize, a free goose. If you recall from a few weeks ago, I added a male nude drawing of Schilling as model by Philip Fleischer (1850-1930) to my collection (see the last photograph below). Hartmann worked in Schilling's studio from 1881 to 1885. In 1900 Hartmann began as a lecturer at the Dresden Art Academy and later retired as a professor. My bid took the auction and this bronze work will be heading into my collection. At that give-it-away price I could not help myself. When I get it in my hands, I will clean it up and post some better photographs.
-------------------------------------------------------------------------- 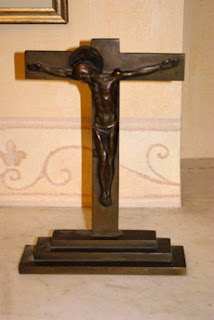 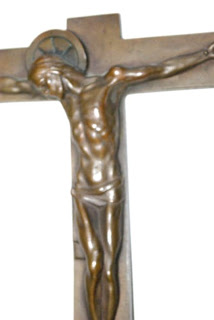 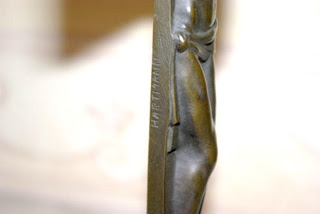 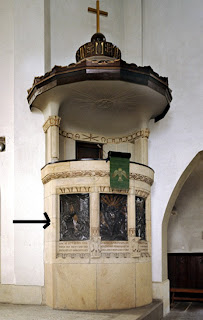 Bronze panels inside a Lutheran Church by Hartmann 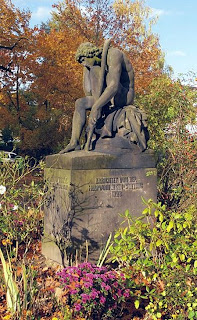 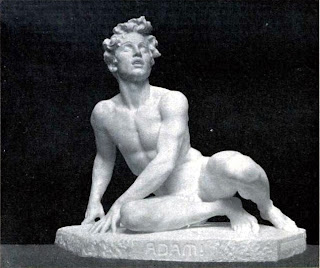 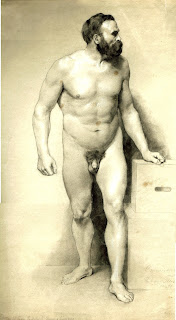 Philip Fleischer (1850-1930) Standing Male Nude (The Model is Johannes Schilling - Instructor in Sculpture at the Dresden Art Academy)
Posted by Passionate about the Academic Nude at 10:53 PM No comments: