Posted by Passionate about the Academic Nude at 11:25 AM No comments: 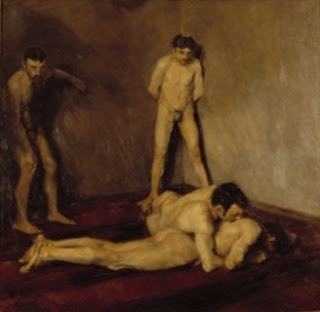 *
One of my favorite sellers on eBay France has listed a copy of the 1920 edition of prints in Max Slevogt's  "Die Wandmalereinen in Neu-Cladow." The prints of his mural paintings are presented in a limited edition signed volume at quite a reasonable price, if you are interested. The first thing that really struck me about these prints was that square format. During those "make a frame, stretch and prime the canvas" days at University, the square format was one of my favorite formats for a painting. You do not see the square format as often as you should. I have used a Hasselblad camera over the years and the Hasselblad is a square format camera and that square really grows on you so naturally the it followed me into my painting classes. Max Slevogt (1868-1932) was a well known German Impressionist painter, printmaker, and commercial illustrator. He initially planned on a career in music but switched to painting and studied at the Akademie der Bildenden Kunste in Munich in 1885. He was greatly influenced by the Impressionistic movement of the time and later spent a term at the Academie Julian in Paris. He later traveled to Italy with his artist friend, Robert Breyer (1866-1941) and started work as an illustrator upon his return to Munich. His first exhibition was at the newly founded Munich Secession in 1893 where he exhibited his painting "Wrestling School." Apparently his composition caused a stir amongst the judges who had convinced themselves that the painting was "immoral" since it depicted naked men entwined on the floor. (Horrors! Somebody had their mind in the gutter)(Illustration above). In the following years Slevogt's work appeared "harsh" and "non-academic" to the straight-laced conservative art critics of late 19th century Munich. I really love the point of view in many of the nudes. I think I see Hebe down there somewhere with her peacocks.
---------------------------------------------------------

Children in a Forest Setting
The Daydream


Dance with Death
Posted by Passionate about the Academic Nude at 2:32 PM No comments: