*
An Auction House in Germany has just listed this beautiful drawing in red chalks by the important 18th century German engraver and designer Johann Wilhelm Meil (1733-1805). His father was the court sculptor in Altenburg. At the University of Leipzig Meil trained as an engraver and attended lectures on art history, art theory, and philosophy. Meil also designed furniture, jewellery, and motifs for porcelain painting. Meil's major field of work was book illustration. In 1787 he became a Professor of composition and expression at the Akademie der Kunste in Berlin. He later became director of the Akademie.
------------------------------------------ 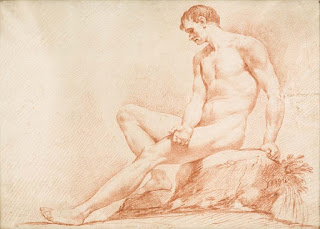 Posted by Passionate about the Academic Nude at 10:50 AM No comments: