*
Van Ham Kunstauktionen, Koln, DE has listed a nice drawing of a nude boy by the well known German artist Julius Schnorr von Carolsfeld (1794-1872) in their current auction catalog. He was a talented draftsman, engraver, and painter who figured importantly in the 19th century German Nazarene movement. In 1818 he traveled to Rome where he was associated with a group of painters who called themselves the Nazarenes, or Lucas Brotherhood (Lukasbund). Inspired by early Renaissance Art and the works of Albrecht Dürer. Schnorr’s oil paintings were characterized by a precise linearity, clear bright colors, and a multiplicity of symbolic detail. He shared his fellow Nazarenes’ interest in a revival of fresco painting and the creation of a “monumental art.” Schnorr left Rome and settled in Munich in 1827, where he served King Ludwig I, transplanting to Germany the art of wall painting he mastered in Italy.
-----------------------------------------------


Posted by Passionate about the Academic Nude at 11:41 AM No comments:

*
Two auction houses in Germany are currently listing works by Ludwig von Hofmann (1861-1945). Villa Grisebach Auktionen, Berlin, has listed an oils on paper study of a standing nude boy (Stehender Junglingsakt) which dates from the 1890's and Ketterer Kunst has listed another of those beautiful pastels by Hofmann titled Badende Jungen (Bathing Youths) which is dated 1915. Enjoy. 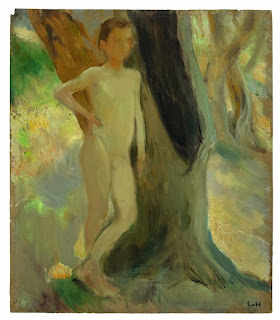 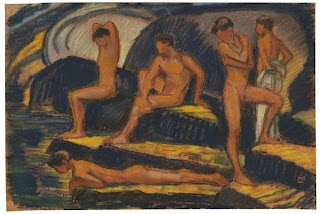 Badende Jungen (Bathing Youths) 1915
Posted by Passionate about the Academic Nude at 3:13 PM No comments:

*
Eppli Auktionshalle, Germany, has recently listed these beautiful compositions titled Männliche Akte beim Schwimmen (Male nudes swimming) and Jüngling hinter Pferd stehend mit Reitergruppe (Young man standing behind horse with rider group) by Arthur Volkmann (1851-1941) in their current auction catalog. I would imagine the bidding will get hot and heavy very quickly on these two works. Volkmann was born in Leipzig and exhibited his love of art at an early age. Fortunately his parents supported his efforts and from 1868 to 1873 he studied sculpture under Ernst Julius Hahnel at the Dresden Art Academy. Later he studied under Albert Wolff in Berlin and was awarded a study scholarship in Rome. In Rome he fell under the influence of Hans von Marees who worked in complete isolation from cultural activities. The rest of his life he was influenced by the philosophy of Marees adherence to the techniques of combining architecture, painting, and sculpture. In 1911 he established a studio at the Stadel Institute at Frankfort.
------------------------------------------------------ 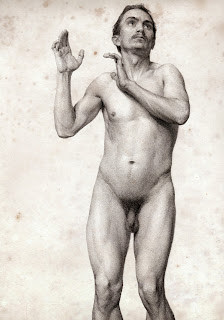 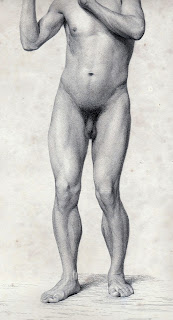 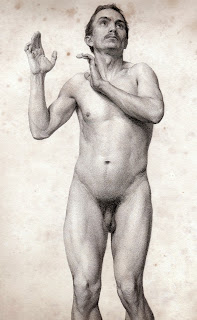 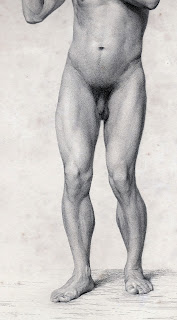 Posted by Passionate about the Academic Nude at 2:33 PM No comments: