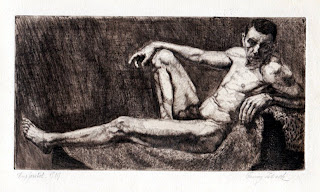 Fanny von Jaksch (late 19th - Early 20th Century) was an Austrian female graphic artist who worked during the late 19th and early 20th centuries. I have been able to find scant biographical information on her but the academic study in my collection is impressive. This is a copper intaglio print signed and dated 1919. I think the most impressive thing about this study is the way the model stares directly into the viewers eyes. Bold as brass and proud of that body. Most models are posed in a prescribed way, staring out into the great beyond but not this guy. He is in your face and challenging in his pose.
Posted by Passionate about the Academic Nude at 9:15 AM