-------------------------------------------
This is just an interesting aside that was prompted by a Discovery Channel program I watched recently about the Lost Female Pharaoh of Egypt. I have mentioned the concept of "appropriation" previously wherein an artist "appropriates" some aspect of another artist's work and reinterprets that meaning into something new and his or her own. As I watched the examinations of the various royal mummies I was struck by what indeed denoted "royalty" in a mummy. Dr. Zahi Hawass made a statement that really hit home with me and I thought of this bronze and that Michelangelo's sculpture of David and the pose those figures have taken. According to Dr. Hawass the one thing that denoted "royalty" was the way the mummy was posed. The left arm was drawn up towards the shoulder and the right arm was extended straight down the side of the body. Only "royal" personages were posed like that in antiquity, just like the figure below. Has Valentine Bender posed Saint John in like manner to indicate royalty? Just a curious observation on that discovery.
------------------------------------------------ 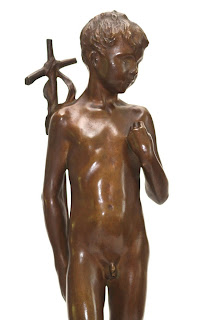