As I was wondering around the house this morning trying to remember my name and where I was, I ran into this bronze relief in a spare room and thought I would go ahead a post it along with the previous bronze relief by Strandman before researching the print by Hans Thoma. Adolph Schmid was born 17 July 1867 in Stuttgard, Germany and taught arts in Pforzheim. He was a well known chaser (person who engraves) and sculptor for medals, reliefs, and bronzes. In fact he won the gold medal at the Venice Arts Exhibition in 1903. He also designed several coins and is well known in the numismatic world of collecting. As a renowned artist of considerable talent he is list in many artist encyclopedias. The subject matter of this little bronze relief was a favorite topic of many Symbolist connected artists at the turn of the last century. The relief is signed in the casting in the lower right hand corner and dated 1902. During the later part of the 19th century and early 20th century there was a widespread group of artists who used the pre-adolescent and adolescent boy as subject matter for works. I have seen this subject matter referred to as "The Cult of the Ephebe" and "The Cult of Boyhood." It all revolves around the physical culture movements and somewhat eroticization of boys on their physical beauty, grace, innocence (yeah right...I had two boys of my own who at times I would have gladly sold into slavery because of their shenanigans...innocent my foot......Cult of the "Let's see who can be the biggest Jackass on planet Earth" might be a better description of boyhood), and sexual naivety (Naive, but not for long once they find Mr. Happy, it's a whole new ballgame, in fact pocket pool becomes an Olympic sport). The list of famous artists goes on for miles and includes: Ludwig von Hoffmann, Ferdinand Hodler, Hans Thoma, Arthur Volkmann, Magnus Enckell, Jan Preisler, Franz von Stuck, Max Klinger, Max Beckman, Adolf von Hildebrand, Nicholas Friedrich, Hugo Hoppener, Eugene Jansson, Frederick Walker, Karl Hofer, and Sacha Schneider, to mention just a few.
-------------------------------------------
Symbolism:

Now, while listing this little bronze, it might not be a bad idea to talk briefly about the Symbolist Movement at the turn of the 19th and 20th centuries. The symbolist began with the idea or ideal first, and then sought to find in nature some "correspondence" or "equivalence" that might be used in such a way as to announce that this art object was not a replication of that object in nature but rather a vehicle for recognition and contemplation of a higher reality. Objects needed to be presented in an iconic way to accomplish this transformation from object to art, thus from thing to evocation. Symbolist color also adopted deliberate distortion of the natural as a means to evoke non-nature. Symbolism shunned the rational, its interest in a state of mind and body in which reason is momentarily suspended.
------------------------------------------------ 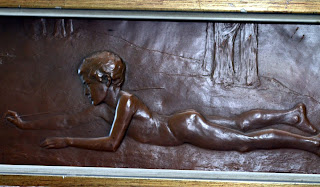 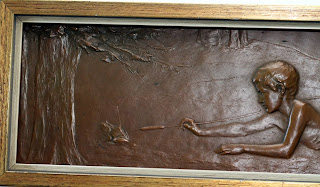 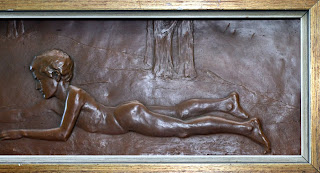 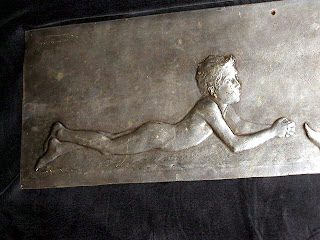 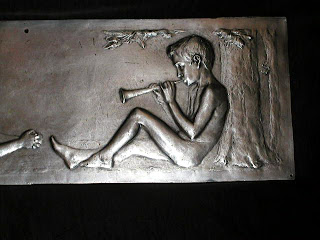 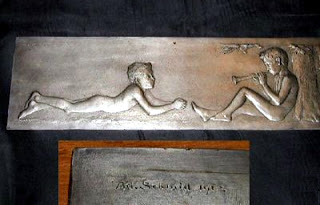 Posted by Passionate about the Academic Nude at 2:03 PM