Below are illustrations of the German Art magazine 'PAN' in which many of von Hofmann's artworks appeared. 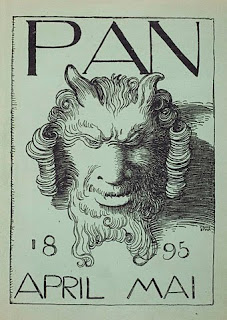 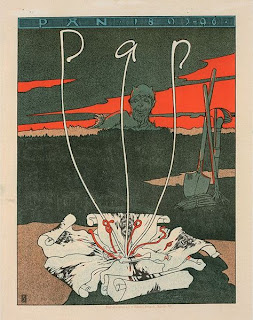 Below are a couple of photographs of the other Ludwig von Hofmann print in my collection. One of the constant themes in Symbolist art is the idea of bathing. The title of the print is "Badende in felsiger Landschaft". It is signed in pencil and numbered 61/200. Ludwig von Hofmann (Darmstadt, 1861 - Pillnitz, 1945) is a major German artist of the early 20th Century. He first studied law in Bonn from 1880 to 1883. The then commenced studies in art at the Dresden Academy (1883-1886) and in the master class of Ferdinand Keller (1886-1888). In the following year Hofmann enrolled at the Academie Julien, Paris, France. There he was strongly impressed by the art of contemporary French painters such as Puvis de Chavannes, Albert Besnard, and Maurice Denis. Hofmann returned to Germany in 1890 and settled in Berlin for the following thirteen years.

Ludwig von Hofmann's years in Berlin were very eventful. There he was a founding member of 'The Eleven' and the 'Berlin Secession'. The foundation of the Berlin Secession (1898) was the first open revolt against academic traditions and paved the way for the creation of modern German art movements, such as Expressionism. During this period, Hofmann was a founding member of the influential arts periodical, Pan. He contributed numerous illustrations to the magazine, including the famous cover designs. As his reputation in the German art world , his circle of acquaintances and associates would include great masters and literature as Arnold Bocklin, Edvard Munch, Max Klinger, Gerhard Hauptmann, and Stefan George.

In 1903 Ludwig von Hofmann accepted the post of Professor at the Archducal School of Art in Weimar. During his years at Weimar he devoted much of his time to painting commissioned murals. Most of his famous original lithographs dat from this period. In both print making and painting he fully developed his famous portrayals of Hellenic life and beauty drawn from his inspiration of models of antiquity. His reputation was well known and collectors of his art works at the time included the Empress of Austria and the German novelist Thomas Mann.

Hofmann left Weimar in 1916 to accept the post of director of the Academy of Arts at Dresden. In the economically troubled times that followed for Germany he turned his artistic talents to illustrating many fine books such as Homers, Odyssey and The Iliad, as well as books by Hauptmann, Eduard Stucken, and Goethe. He retired from the Dresden Academy in 1931.

In 1933 the National Socialist Party of Adolph Hitler took power in Germany. Like so many of the very creative artists of the period, his works did not fall into the debilitating category of state approved art. Many of his works were destroyed during the purge of 'Degenerate Art' at Erfurt in 1937.

"Badende in felsiger Landschaft" is a powerful example of von Hofmann's famous neo-classical artworks. Hofmann rarely numbered his original lithographs and etchings, particularly during his years in Weimar. The editions of his prints ranged from fifty to one hundred print impressions. 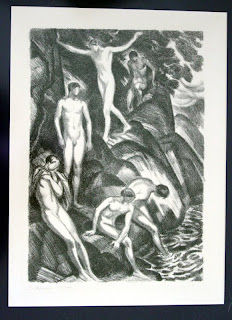 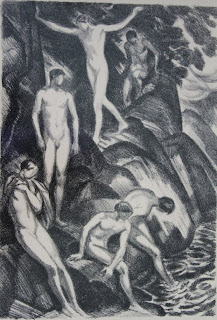 Posted by Passionate about the Academic Nude at 11:09 AM