Drawing is the foundation of all art. Drawing is a fusion of your knowledge, your personal vision, and above all, your craftsmanship. The term 'Academic Art' is usually associated particularily with the French Academy and its influence on the Paris Salons in the 19th Century. Though Academic Art can be meant to extend to all art influenced by the European Academies, it's often meant to refer to artists influenced by the standards of the French Academie de Beaus-Arts.

The Academie des Beaux-Arts was founded in an effort to distinguish artists "who were gentlemen practicing a liberal art" from craftsmen, who were engaged in manual labor. This emphasis on intellectual component of art production had a considerable impact on the subjects and styles of Academic Art.

Paris Salons were held in the Salon d'Apollon in the Palais du Louvre in Paris. They were enormously influential in establiching officially approved styles and in molding public tastes in art. They helped consolidate the Royal Academy's dictatorial control over the production of fine art.

Academic Art was in fashion in Europe from the 17th to 19th century. 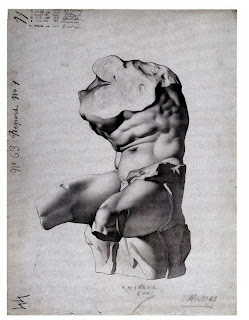 Prior to the establishment of the Academy throughout Art history the artist was hired to do a job and was hired for his skills as a craftsman. He was apprenticed to a workshop or to an Artist's Guild and learned his trade at the knee of an experienced craftsman. Any artist worth his salt is always working to improve his powers of observation, mainly by working in the simplest medium available. Drawing develops the eye's powers of observation. Line drawing is the place to begin because it develops the ability of the eye to read contours. At later stages in his training the artist will learn mass drawing, which offers the ability to read values, that is, lights and darks. The main purpose of mass drawing is to develop one's perception of lights and darks (values), and to prepare the student for learning to paint in oils. There are a number of methods for teaching drawing. The method used in the classical atelier and in modern studios devoted to classical methods is the sight-size method.

Sight-size drawing is the method wherein the easel is positioned in such a way as to facilitate the drawing of the subject exactly the same size as the subject itself appears from the student's chosen vantage point. This vantage point, usually marked on the floor with a piece of tape, should be far enough away from the paper or canvas to allow the artist to see the entire drawing or painting at once and to also see the subject at the same time. This side-by-side comparison between the subject and the drawing makes it easy to spot errors in the drawing, which can then be corrected before they can throw off subsequent judgements by the artist. All angles and proportions are rendered exactly as they are observed and measured from the chosen vantage point. Measuring is accomplished usually by the use of a plumb bob. The sight-size method may be used for drawing on a reduced scale as well, simply by placing the easel where the image of the subject is the right size for the paper or canvas. It is best suited for beginning and intermediate students.

The modern classical atelier approach to art education has its roots in the guilds of the early Renaissance period. For centuries master artists transmitted their knowledge and technique to their apprentice students. This tradition reached its zenith in the second half of the 19th century, when Ateliers and Academies prepared thousands of artists. Skill-based instruction in the 19th century was centered on the observation of nature, sound artistic principles, and universal themes. One reference source that will give you a good history of 19th century methods is Gerald M. Ackerman's book: Charles Bargue _ Drawing Course. The book illustrates the various lithographs students used to copy in the Bargue Drawing Course. Above is illustrated one of the lithographs in Bargue's course. When I visited the private Atelier in Toronto, they were using the lithograph in their advanced copy work, one step beyond copying from the cast.

Most of the examples of Academic art I have managed to collect date from the late 19th century and are representative of the classical methods of artistic training endemic to that time period. Technically they should be referred to as academies, drawings of nude models posed in a studio setting.
Posted by Passionate about the Academic Nude at 9:19 PM