Hans Thoma Prints are headed for the conservation Laboratory 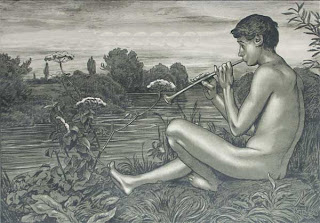 Above is an illustration of the Hans Thoma print from a later edition that I found on the Adonis Gallery website. 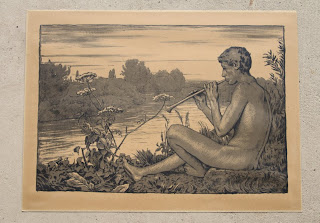 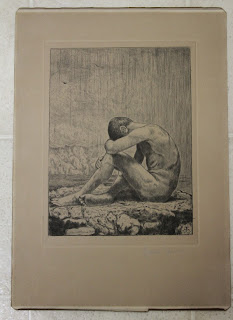 I have two heavily acid stained Hans Thoma prints, one, a lithograph dated 1893, signed in the plate (not sure of the title, will have to do some research on the print), and the other an intaglio print titled "Der Verlorene Sohn", "The Prodigal Son", dated 1919, signed in the plate and in pencil. Thoma's prints are very collectable and I believe well worth the expense to have them restored and brought back to the original condition at the time of printing.
Update on the untitled Lithograph (May 21, 2010). I happened upon this same print on the Adonis Gallery website and the title of the print is (according to the gallery) "Pan". The print they had is dated 1896 and apparently from a later edition. This print is dated in the plate "93". The Restoration Lab called today and I gave the all clear for the restoration. She indicated the lithograph "Pan" is full sized and was meant to be matted to the outside edges. The other print "Der Verloren Sohn" has been cut down from its original dimensions and can be framed closer to the platemark. The original color is apparently "cream" toned paper. Looking forward to getting them back into my collection in like new condition.
Posted by Passionate about the Academic Nude at 9:55 PM