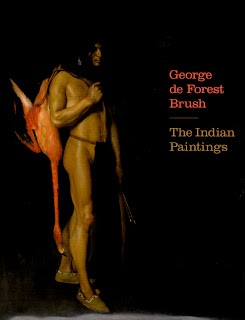 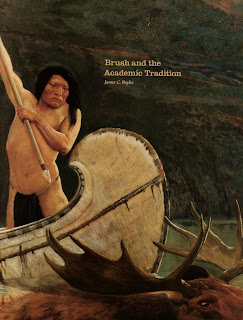 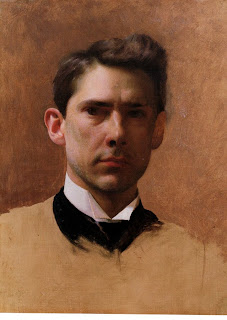 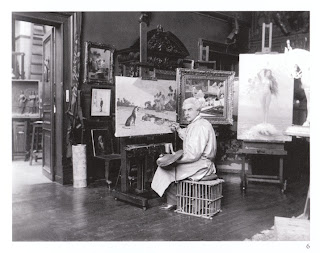 Several weeks ago Mr. UPS delivered another volume from Amazon.com. The book is a lavishly illustrated book titled: George de Forest Brush - The Indian Paintings by Nancy K. Anderson. I was familiar with de Forest Brush's Indian paintings from Art School and had always enjoyed his talent. My Father's fraternal Grandmother was a full blooded Native American from the Lower Creek Tribe in Alabama so I have a somewhat vested interest in de Forest Brush's depictions of the Native American. Within the context of this volume is a chapter titled: Brush and the Academic Tradition by James C Boyles (illustration above). It contains some very interesting information regarding de Forest Brush's training at the Ecole des Beaux-Arts in Paris and the influence of the Atelier of Jean-Leon Gerome on the many American painters who flowed through his studio during his tenure. Please allow me to paraphrase some of the information contained within that chapter. Gerome was the most popular instructor with the Americans. He had developed a formidable reputation in the United States as a leader in modern art. In 1868, Gerome collaborated with Charles Bargue and Goupil in the publication of the Drawing Course, a technical manual that offers insight into Gerome's teaching method and, thus, what Brush experienced in Gerome's Atelier.
-------------------------------------------
In September 1873 Brush arrived in Paris to begin his studies at the Ecole des Beaux-Arts. At the time Paris was the undisputed capitol of the European art world. French artists were seen as leaders in the new movements and many would become international celebrities. The reforms of 1863 expanded the Ecole's technical instruction. The most significant reform was the establishment of ateliers within the school, three each for painting, sculpture, and architecture, with additional ateliers for engraving, medallions, and jewelry. Instruction at the Ecole des Beaux-Arts continued to adhere to the academic principle of the figure as the central focus of the student's achievement. The ability to depict the human body was (and should be) considered the standard of technical and artistic mastery. To achieve this level of expertise, students followed a rigorous regime of repetitive drawing. They sketched from casts or prints of statues again and again until they achieved a proficiency in working with light and form as well as an understanding of the basic aesthetic principles evident in the works of classical sculptors. Students were encouraged to copy works at the Louvre, although prints were sometimes used as substitutes due to overcrowding in the museum halls. When the student firmly demonstrated the basic skills of drawing, they were allowed to draw from the live model. Though female models were occasionally employed (critical to understanding the scarcity of academic drawings of females from this time period), the male model was preferred owing to the predominance of nude male subject in Greek and Roman statuary and in contemporary history painting. Also preferred was a lean, well-defined model, in order to aid the students' understanding of musculoskeletal structure of the body. Usually the model held a certain pose for a week (Monday through Saturday), allowing the students ample time to achieve an idealized standard and the full reality of the nude body before them. Periodically, students competed within a studio, quickly drawing from the nude model and winners earned both recognition from the professor and a better position in the overcrowded studio (that's one way to reward superior effort). Semiannually, the school staged the concours des places, a lengthy exam on anatomy, perspective, history, and, most importantly of all, the students ability to draw the figure. Out of the hundreds that competed, seventy were chosen and permitted to take the advanced evening course in life drawing under Adolphe Yvon (1817-1893). Brush himself competed at least twice in the concours and finished 49th in March 1876 and 40th in March 1878.
------------------------------------------
Even after his return from Europe, Brush continued working from a model and would throughout his entire career. He constantly urged his students to always start with the nude. He later taught art at the Art Students League in New York.
------------------------------------------
I highly recommend this beautiful book for those who are interested in de Forest Brush's figurative works and an introspective examination of American art and European training in this developmental time period.
------------------------------------------ 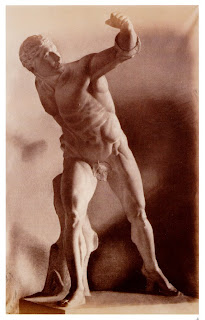 George de Forest Brush... Drawing From The Antique...Fighting Gladiator ...circa 1872 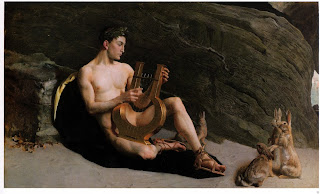 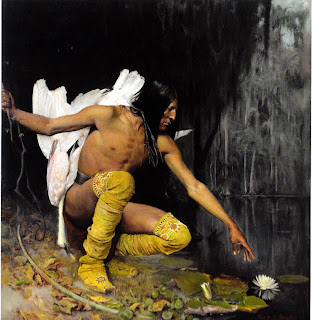 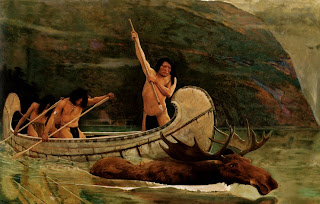 
Posted by Passionate about the Academic Nude at 10:09 AM